A tried campaigner from the Goblin Wars, now seeking his fortune.

Little is known about this mysterious patron of the family, but he always told his children they were related to one of the greatest men in the old Empire. A sage of great renown, who taught emperors and arch-mages alike. Sadly, none of this intelligence seemed to be bestowed in John when he selected a track of land near the goblin frontier for his turnip farm.

During one of the goblins raids, the turnip farm was rooted from the earth, leaving only a sole survivor. Socrates, after burying his daddy and ma, his wife and children, his brothers and sisters, his uncles and aunts, his nephew and nieces, his goats and horses, his chamber pot and best button, some remaining turnips and a single leek and finally and obviously his shovel, set out and join a nearby militia.

In the 103rd, Socrates discovered that when he yelled at people they usually did what he said – which was more than he could say for turnips. “Filly lil bugga’s, nowno matta ‘ow you yell, ’nips just dang wolnt lis’en.” Rising to some level of medium authority, Socrates was at home in the army; his halberd replacing his now entombed shovel.

Why he left, even he can’t say for sure. Is he seeking fortune? Or perhaps fame? Maybe he quests to find out who his great ancestor was? Or for his long lost spade? “It sure t’aint dat last und, I hopes.”

After taking a blow to the back head, Socrates personae has drastically changed. Gone is the foul mouth, ex-military leader/turnip reaper. In his stead, an educated, well-spoken mathematician Socrates (Greek pronunciation). The greatest thinker of the long fallen Nerath Empire and (possibly) long lost patriarch of the Johnson clan!

Now trapped in this primitive world, Socrates (Greek pronunciation) has found himself in the service of the noble Chalmers Hemmingwood III, Lord of Silverdown. 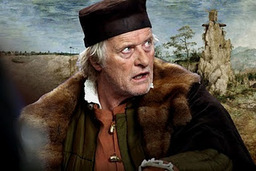