The finest looking horse in all of Hammerfast

Arienne is a 5 year old mare of unknown lineage, acquired by Chalmers Hemmingwood III, upon his return to Hammerfast after the failed colonization of the town of Inverness.

A true “white” horse, Arienne has been referred to as “the finest looking horse in all of Hammerfast” since former owner Ogrim Bolnore brought her through the town gates a year ago. Unfortunately for Ogrim, looks did not transpire to performance, as Arienne was found to have a temperment unsuitable for combat and only middling abilities in terms of strength and speed.

How Chalmers came to acquire the horse from Ogrim is a matter of some debate among those interested in such things. While most believe Chalmers simply paid Ogrim’s outlandish asking price, others have suggested that that a stretch of bad luck at the tables led Ogrim to gamble the horse away to Chalmers; and even though Ogrim eventually turned the tables, Chalmers would not part with the horse, even if he was leaving with empty pockets.

However, Chalmers’ purchase was soon for naught. After losing face in a prank gone wrong, Chalmers temporarily relinquished his horse to Valafein as reparations. Emboldened with his victory in their petty squabble, Valafein then promptly rode the parade horse into direct combat against a horde of Goblins and Wargs. A foolish gambit that cost “the finest looking horse in Hammerfast” her life. 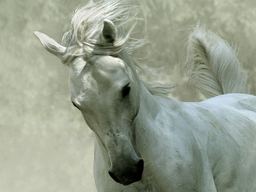